I’m excited about new work on schedule for release later in the year. Stand by for news about ONE KIND FAVOR!

I am thrilled to announce that Tupelo Press released my newest novel, At the Gate of All Wonder, earlier this year, on September 30th, 2018. (To order a copy, click the  book cover image; link takes you to Tupelo Press.org)

What Others are Saying:

Andrea Barrett’s review describes it thus: “Deeply odd, wonderfully original, At the Gate of All Wonder has the power of fresh myth. From these enchanted woods we emerge, as we do after leaving the worlds of Joy Williams’s The Changeling or Christina Stead’s The Man Who Loved Children, terrified, illuminated, struck all over again by the wonders of the natural world and the passionate strangeness of familial love.”

A Quick Overview of At the Gates of All Wonder: 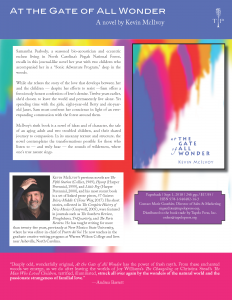 Samantha Peabody, a seasoned bio-acoustician and eccentric recluse living in North Carolina’s Pisgah National Forest, recalls in this journal-like novel her year with two children who accompanied her in a “Sonic Adventure Program,” deep in the woods.

While she relates the story of the love that develops between her and the children — despite her efforts to resist —Sam offers a ferociously honest confession of love’s demise. Twelve years earlier, she’d chosen to leave the world and permanently live alone. Yet
spending time with the girls, eight-year-old Betty and six-year old Janet, Sam must confront her conscience in light of an ever-expanding communion with the forest around them.

McIlvoy’s sixth book is a novel of ideas and of character, the tale of an aging adult and two troubled children, and their shared journey to compassion. In its uncanny texture and structure, the novel contemplates the transformations possible for those who listen to — and truly hear — the sounds of wilderness, where one’s true nature sings. 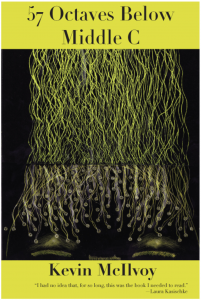 57 Octaves Below Middle C (from Four Way Books), came out September 5, 2017!  (To order copies, click on the book cover image at left, or follow these links directly to IndieBound.org  and/or FourWayBooks.com.

Four Way Books describes this work as “…Affirming what John Berryman called ‘the stance of wonder,’ these stories, prose poems, and short-shorts are fool’s koans, inside-out riddles in which we get to spend a while, emerging a little older, a little more vulnerable, a little more transformed. Part Muddy Waters and part Russell Edson, with more than a nod to Lydia Davis, Jean Follain, and Henri Michaux, 57 Octaves Below Middle C descends like Antoine de Saint-Exupéry’s The Little Prince to find the wonderstruck child inside the world-weary adult. Yet this is no work of whimsy or fancy: for all McIlvoy’s verbal riffs and musical interludes, he writes from deep pathos, attempting to peel back the constructed selves we shell about us in our daily lives. He makes us stranger to ourselves so that we can see ourselves again.”

Listen for yourself! The Four Way Books YouTube trailer below features me reading from 57 Octaves Below Middle C. Take a minute to listen:

I have made my CD recordings, Selections from 57 Octaves Below Middle C, available for direct download from this site.

Wordplay (with Jeff Davis & Lockie Hunter) recently featured Mc on the show: http://stream.ashevillefm.org/afm-word-play-09032017.mp3. Click on the link to listen, or paste the URL into your browser.

First Draft: A Writer’s Dialogue (from Aspen Public Radio, with Mitzi Rapkin) also recently featured Mc: http://www.aspenpublicradio.org/programs/first-draft. Click on the link to listen, or use this URL to download via iTunes: http://apple.co/1HCVfjA.

Here’s what other writers are saying about this book:

Karen Brennan: “As if Blind Willie Johnson had stumbled through Alice’s looking glass, 57 Octaves Below Middle C offers a thrilling mash-up of the soulfully executed blues riff and the wondrously weird. In McIlvoy’s latest, beneath the artistry and the melody, the hilarity, the poetry, beneath every note (and all the octaves) in this extended ballad of precisely inflected narratives, is a cri de coeur. A tour de force!”

Matthea Harvey: “McIlvoy’s latest book sings strange songs of belonging—a man who collects lawnmowers (‘I need to mow. I needed the right mower. Many of us do’) encounters a lawnmower cult whose leader speaks entirely in haiku; another who turns doglike when suffering from migraines (the headaches are named ‘Miss Luck’ but also ‘Death’s substitute teacher with no syllabus’) meets a pack of men who endure the same transformation; a brother and sister bond over their shared love of duct tape. Hovering between prose and poetry, the linked pieces in 57 Octaves Below Middle C are marvelously peopled with characters you’ve never seen before and full of tragicomic insight (‘I was an extraneous adverb when my father, the verb of the family, died’).”

Laura Kasischke: “57 Octaves Below Middle C gives the reader, in a series of meditative, dreamy, suspenseful, mind-bending, and sometimes hilarious stories, a vision we had no idea we’d been waiting all our lives to see, and to have brought to us so clearly, with such strangeness and such clar-ity. This is a whole new landscape—both inner and outer—and only a writer as attentive to language as McIlvoy could bring such a book into the world. He ignores none of the necessities of a great story in any of these, no matter how inventive he’s being, because this isn’t experimentation. This is work fully informed and appreciative of the conventions of storytelling, while playing round with them, wildly, and with total success. Because McIlvoy’s completely original forms fulfill all of our traditional longings—to be scared, to be moved, to believe, to be changed, to laugh—this is a miraculous collection. It opens up possibility unto new possibility with every page. I had no idea that, for so long, this was the book I needed to read.”

Kirkus Review writes: “An offbeat batch of short and flash fiction, generally concerned with domesticity but more notably obsessed with the sound and feel of language.

These experimental stories from McIlvoy (The Complete History of New Mexico, 2005, etc.) revel in their peculiar setups. A man buys a lawnmower from the poet Basho; a group of suburban men run through their neighborhood like werewolves, “a pack of men pulling a sleigh full of prostration”; vets go golfing in the snow; a narrator contemplates a person dressed as a Sprite can. Straightforward plots never follow from these premises, but McIlvoy is more interested in wordplay and observation than narrative. That can have some pleasurably jarring effects: one cycle of stories concerns a skateboarding-obsessed man named Teacher Reptile who writes epic fantasy novels and speaks in a patter that’s half King James Bible, half Thrasher magazine. (“Give unto me the great chain, that I may rule the pit without bottom, the session that hath not end of grind.”) McIlvoy can play up the humor and absurdity of language, as when he connects possessives like boxcars (“Inside their home’s heart’s sounds: the tub’s faucet’s dripping’s splashings…”) or upends the conventional aggression of the bank-robbery note. Even so, the overall mood is somber and contemplative, filled as the stories are with the likes of drowned people returning home, lonesome ghosts playing music in a bar bathroom, and hard-luck types aimlessly riding a bus in New Mexico. Most somber (and revealing) of all the stories is one teacher’s recollection of a student producing a grammatically clumsy but charming sentence. “I have needed, wanted your flooding truth to kill what I have been,” the narrator writes, echoing McIlvoy’s consistent urge to distrust telling the story straight and to let the provocative premise and odd delivery carry the day.

A challenging but fresh and inventive set of prose poems.”